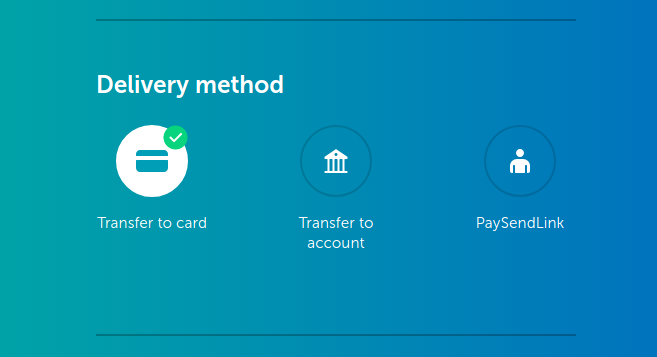 PaySend allows you to send international money transfers between multiple countries. The key feature of PaySend is extremely low fixed commission, which does not depend on the amount sent.

For example, the charge only:

Your receiver’s card is credited in local currency and you will always know the exchange rate upfront. We will display both the sending and the receiving amount at the time of making a transfer, so you can make an informed decision. Our rates are as close as possible to the mid-market exchange rate – giving you more and saving your hard-earned money.

For example, from European Union to any country you can send money for a fixed price of €1.50. There are no other hidden fees and charges. The currency exchange rate is chosen the most profitable for you, close to the stock rates, in the conversion of currencies is not included additional commission (as is done, for example, in Western Union).

PaySend allows you to make a transfer from card to card, as well as to a bank account and a phone number.

Money comes almost in real time, that is, instantly, but due to the nature of service in some banks, the transfer can take up to three business days.

People are not involved in transfer, all transfers can be made 24/7 either from a laptop, tablet, or through a mobile application on your smartphone.

Crediting of money to the beneficiary card occurs in local currency using the real exchange rate without any hidden fees or additional fees.

Fast and responsive support in English and local languages.

PaySend was founded in 2017, it is still a very young company, but it has already proven its stability and reliability.

So, the key advantage of Paysend is: a uniquely low commission breaking ideas about fees for international transfers. It should also be noted the instantaneous receipt of funds, which also distinguishes PaySend from many other ways of international sending money.

You can make the first transfer to PaySend for free, just enter the promotional code: 0d8425